Narnia Maps: The Horse and His Boy 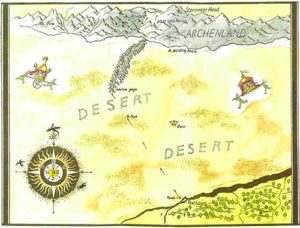 Archenland:
“When they had crossed the neck of the pass and come a good deal lower they reached more open ground and from here Shasta could see all Archenland, blue and hazy, and even (he thought) a hint of the desert beyond it.”

Stormness Head:
“I see one—two—three eagles wheeling in the gap by Stormness Head. One is the oldest of all eagles. He would not be out unless battle was at hand.”

Mount Pire:
“The double peak of Mount Pire, far ahead, flashed in the sunlight and Shasta saw they were a little out of course.”

Anvard:
“And there weren’t many months in which one or both of them didn’t come trotting over the pass to visit their friends at Anvard.”

Oasis:
“For though they could reach the oasis by the end of their first day’s march, yet the springs there would be too little for the thirst of all those soldiers and their beasts.”

rock:
“At last there was something different—a mass of rock sticking up out of the sand about fifty yards long and thirty feet high. It did not cast much shadow, for the sun was now very high, but it cast a little.”

narrow gorge:
“At first it was worse in there than it had been out in the open desert, for there was a breathless stuffiness between the rocky walls and less moonlight. The slope continued steeply downward and the rocks on either side rose to the height of cliffs.”

Tombs:
“Things like great stone beehives,” he said, “you can’t possibly miss them. And the best of it is that none of the Calormenes will go near them because they think the place is haunted by ghouls and are afraid of it.”

River Winding Arrow:
“The eastern-flowing river, which was pouring from the higher mountains at the western end of the range, was far too swift and too broken with rapids for them to think of swimming it; but after some casting about, up and down the bank, they found a place shallow enough to wade.”

Tashbaan:
“I know my way to Tashbaan. After that comes the desert. Oh, we’ll manage the desert somehow, never fear. Why we’ll be in the sight of the northern mountains then. Think of it! To Narnia and the North! Nothing will stop us then! But I’d be glad to be past Tashbaan. You and I are safer away from cities.”