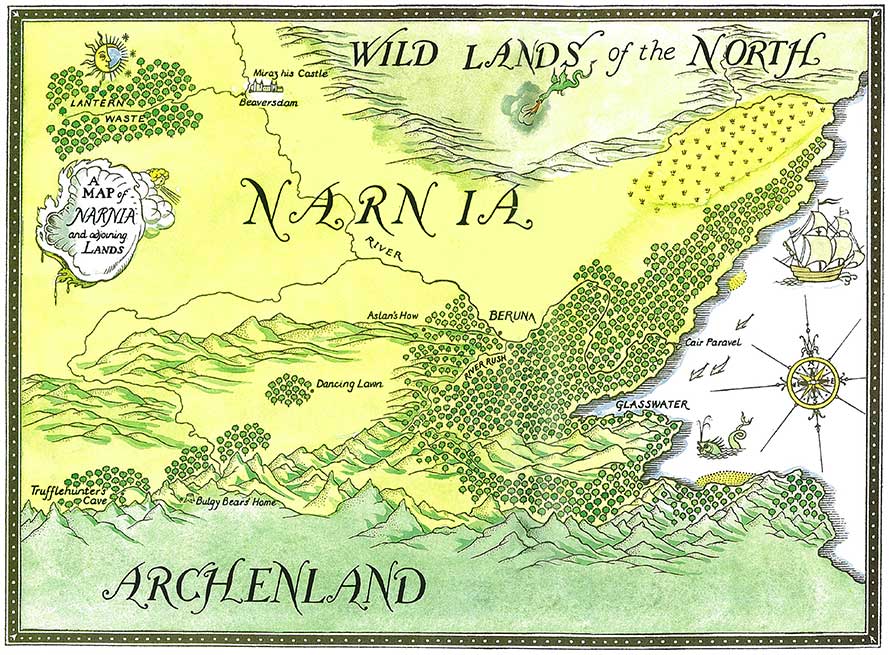 Cair Paravel:
“For now all knew that it was indeed the ancient treasure chamber of Cair Paravel where they had once ruled as Kings and Queens of Narnia.”

Miraz his Castle:
“Prince Caspian lived in a great castle in the Center of Narnia with his Uncle, Miraz, the King of Narnia, and his aunt, who had red hair and was called Queen Prunaprismia.”

Trufflehunter’s Cave:
“The badger was called Trufflehunter and he was the oldest and kindest of the three.”

Bulgy Bear’s Home:
“On a fine summer morning when the dew lay on the grass he set off with the Badger and the two Dwarfs, up through the forest to a high saddle in the mountains and down onto their sunny southern slopes where one looked across the green wolds of Archenland.”

Dancing Lawn:
“The place where they had met the Fauns was, of course, Dancing Lawn itself, and here Caspian and his friends remained till the night of the great Council.”

Beruna:
“They could see open country stretching before them to the horizon and, in between it and them, the broad silver ribbons of the Great River. They could see the specially broad and shallow place which had once been the Fords of Beruna but was now spanned by a long, many-arched bridge.”

River Rush:
“You knew this country hundreds—it may be a thousand—years ago. Mayn’t it have changed? A landslide might have pulled off half the side of that hill, leaving bare rock, and there are your precipices beyond the gorge. Then the Rush might go on deepening its course year after year till you get the little precipices this side.”

Glasswater:
Twilight was coming on as they rowed slowly up the windings of Glasswater Creek—a twilight which deepened as the banks drew closer together and the overhanging trees began almost to meet overhead.

Aslan’s How:
“What Trumpkin calls Aslan’s How is obviously the Stone Table itself.”

Beaversdam:
“On his left was the gleam of the Great River, and everything was so quiet he could hear the sound of the waterfall at Beaversdam, a mile away.”