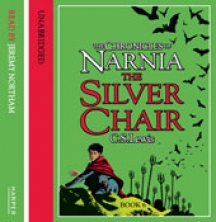 The Silver Chair (The Chronicles of Narnia, Book 6)

The sixth in the series of the classic fantasy tales – The Chronicles of Narnia. This edition is complete and unabridged.

Drawn back to Narnia, Eustace Scrubb and his new friend Jill Pole are sent to rescue a captive prince. In a world where evil weaves a spell, Giants and Marsh-wiggles can be friend or foe, but the stakes are raised when they reach Underland and come face-to-face with a notorious and terrifying opponent.

On 9 December 2005, Andrew (Shrek) Adamson’s live-action film adaptation of The Lion, the Witch and the Wardrobe will be released by Disney, and it is already being hailed as the biggest film franchise of all time, guaranteed to appeal to adults and children across the globe. The second film is already in development.